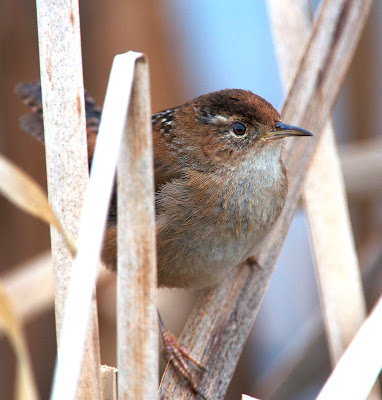 Just like last year, March is when the Marsh Wrens start singing.  Of course, a lot of birds start singing in March, it's just that it's hard to find Marsh Wren's when they aren't singing as they spend much of their time down low among the reeds of marshy areas. 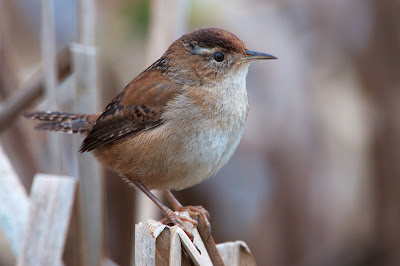 It was a pretty dreary day a couple of Sunday's ago, but that didn't deter a few wrens at Ridgefield National Wildlife Refuge from composing their song of chirps, buzzes and warbles. 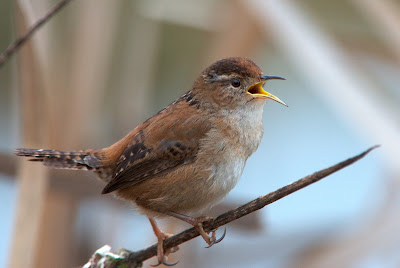 Though these shots were taken just outside my car at Ridgefield National Wildlife Refuge's auto tour, this is a small bird.  So I was lucky to have rented a 200 - 400mm zoom along with a 1.7x teleconverter.  That's boosts the zoom at 400mm to 680mm.  Multiply the 1.5x crop caused by the smaller sensor in my D90 and you have an equivalent 1020mm.
I really like the 200 - 400mm lens, but I prefer the 600mm Nikon offers.  Both have a wide open f-stop of 4.0, but in order to get the reach of the 600mm, I have to use the 1.7x teleconverter.  That increases the f-stop to over 6.0, slower than my current 70 - 300mm zoom.  With all the cloudy days we have here in western Oregon, I really want something faster. 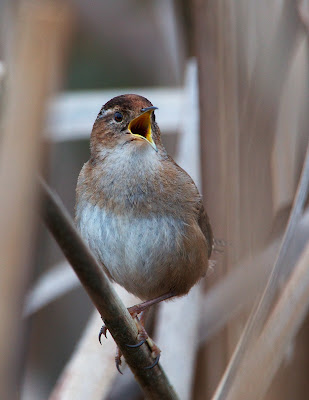 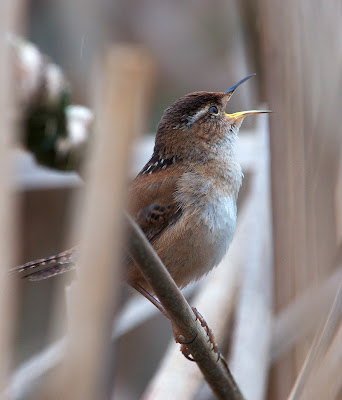 Anyway, for such a tough bird to photograph, I've had pretty good luck at RNWR.  The car blind really does work out quite well.
Posted by Rick at 9:26 PM

Rick
Wilsonville, OR, United States
I first started birding (we called it bird watching back then) when I was in grade school living on the plains of Minnesota. My best friend Mike introduced it to me. I never lost interest, but as I grew into a teen and on into adulthood, it wasn't an active hobby. I've always wanted to photograph birds, but found the hobby too expensive. On March 5, 2010 I used some unexpected money to buy a Nikon D90 and a couple of zoom lenses. Other than that expense, the hobby is now practically free. I can take as many digital pictures as I want without buying film or having to get them developed. So I'm back at it, full force, after about 40 years.

All images are copyright Rick Leinen 2010 - 2011. You may use them for personal and educational purposes but they may not be used for profit.